It's Quiet Uptown...Hamilton comes to The Saenger 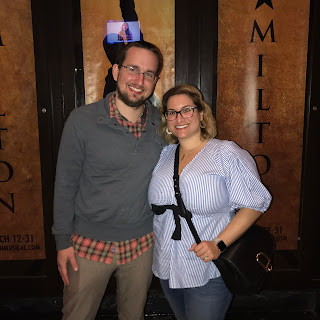 One of the things I love about New Orleans so much is The Saenger Theatre.

Prior to Katrina, it was the spot to see your occasional play/musical or to see a favorite musician who wanted a more intimate evening with their fans. With the coming of Katrina, I thought we might lose that. Now, so say that now sounds ridiculous, but when Katrina hit, there was so much talk of not just residents leaving, but whole businesses picking up and going somewhere else. I mean, if they had to start over...why not start over somewhere not in a bowl, below sea level?

But we are resilient. We surprised ourselves with our resiliency as residents who chose to stay and with business who saw this as their home too. The support we gave each other from businesses to residents and vice versa, is what IS New Orleans.

Following Katrina, it took The Saenger eight years to open again. Eight years. And I am so glad for the investment and reopening. The Saenger is a staple of my city, much like the Orpheum Theater or the Joy Theater.

Now, with its reopening coming up on six years and the line up for this season's Broadway in New Orleans coming closer to an end, to say I was excited for one show in particular is an understatement. We have never been one to get season tickets and would purchase individual tickets based on what shows we wanted to see. However, this season was different. This season was "Hamilton." 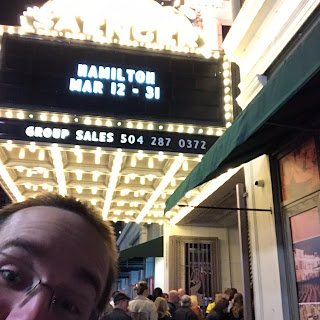 All the hulabaloo we have heard for roughly four years. The outrageous cost people were selling their tickets and the outrageous amount people were willing to spend. And The Saenger had "Hamilton" as part of the 2018-2019 season? I mean...it wasn't even a question.

Of course, the cost was the logical draw. Knowing we would get awesome seats at a fair price and still have all these other amazing shows to go to throughout the season, but it was the music, and the diversity, and the spirit that ultimately drew me in. And I was not disappointed.

There are times people give something so much hype that once you see it or hear it, its a total letdown. It happens all the time. But when I tell you "Hamilton" went above and beyond my already high expectations...you have to know I truly mean it.
I have thought about seeing this play for three years. I have listened to the soundtrack on repeat for two years. I have sat with this date in my calendar for a year. And IT DID NOT DISAPPOINT! (Please clap your hands together after every word, henny!) 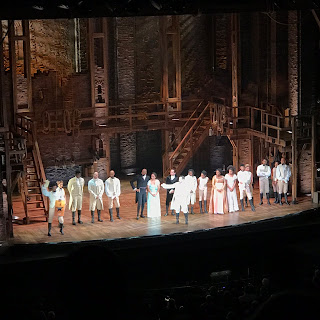 The music...oh the music. Head bopping, feeling the beat. The lyrics are poetry and knowing that a man who some would say was just a substitute teacher dreamt these words and put it all together...I mean, it just shows you exactly why and how he created something so many of us fell in love with. We are him. Think big, and dream bigger.

The cast was strong. They were boisterous and proud. You felt it in the air. To be a part of not just a telling of history, but also being a part of a shift in the Broadway Musical world. A part of the shift in openly discussing diversity and showing that we still have so much further to go...without being angry or ashamed to acknowledge it, but taking the steps to go further, to include and accept. Acceptance has long been a part of Broadway culture, but this telling of history in this form truly sought to bring EVERYONE together.

Lin-Manuel Miranda wrote something that took place in the late 1700s, and yet as I sat there, 2019, watching this story unfold seamlessly...it all looked so familiar. 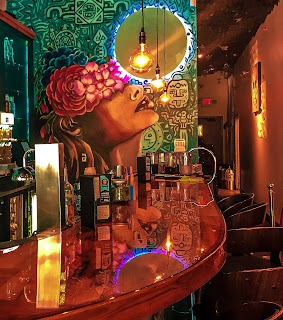